Diamonds were once the penultimate 75th anniversary gift. These days though, a diamond anniversary seems to come around much faster.

The celebration of wedding anniversaries has been with us for a long, long time. In the Holy Roman Empire, for example, couples celebrated by the husband crowning his spouse with a wreath of precious metal. Silver was the choice for 25 years and gold for the 50th anniversary. Many believe this tradition persisted through the Middle Ages, when wreaths also became a symbol of long life and prosperity.

Although diamond is traditional for a 75th anniversary, couples celebrating such long life were rare indeed. Much like these fabulous gemstones once were themselves. 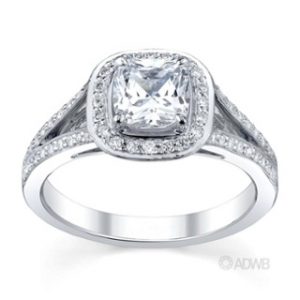 Over time, more celebration years and gifts became traditional. Most of these (like paper, cotton, silk and iron) were symbols of their day as well as tokens of esteem.

5 – Wood – this may have been a spindle or lace bobbin
10 – Tin – maybe a watering can or milk pail to help out at home
15 – Crystal – of the glassware variety, a bowl or stemware perhaps
20 –  China – a new set of fine bone china or possibly a collectable
25 – Silver – anything from a dressing table set to grand candelabra
30 – Pearl – graduated strands with a diamond clasp were popular
40 – Ruby – typically an anniversary ring, with gems set in line
50 – Gold – something made from the most enduring metal of all
60 – Diamond – for preference, a diamond anniversary ring or watch
75 – Diamond – perhaps a stunning brooch or diamond necklace

Diamonds and the Modern Anniversary

Especially between couples, most modern gifts are personal. The household goods of days gone by are much less popular. So it’s not so surprising anniversary gifts have moved with the times too.

Create your own piece of history by customising your very own diamond ring here.