A 14.93 carat Fancy Vivid Pink Diamond is about to be the most expensive piece of jewellery ever offered by Christie’s Hong Kong. The gem goes under the hammer at the Magnificent Jewels sale in Hong Kong on November 28. The gem is set in a ring and carries an estimated auction price of USD $28 million – $42 million.

The gem, named the Pink Promise, is a type IIa stone, meaning it includes little or no nitrogen. It is also classified as VVS1, a clarity grade that comes after completely flawless (FL). 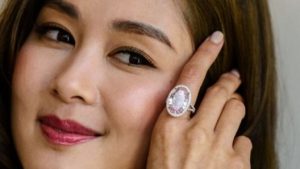 But, it won’t be the only pink diamond on offer at the auction. Another 8.80-carat, fancy intense pink diamond set in a ring is also on offer. This one is expected to sell for anywhere between USD$8.8 million – $12 million.

The pink diamonds leading the Christie’s sale are “offered in response to the continued appetite of collectors around the world for pieces of mesmerising beauty and unsurpassed quality” says Vickie Sek, Christie’s deputy chairman and director of jewellery for Asia.

Pink diamonds are considered among the most valuable diamonds in the world and make up less than 2% of diamonds produced in a year.

Are you inspired by this magnificent jewel? Customise your own dream ring here.