How much would you expect to pay for a fancy vivid blue diamond necklace? Spare change of $100 thousand? A cool $2 million? Keep going. Rapaport note that Christie’s of Hong Kong expects this 8.01-carat, internally flawless, pear-shaped, fancy vivid blue diamond necklace to sell for between $18 million and $25 million at their upcoming event The Magnificent Jewels, a live auction to be held at the Hong Kong Convention Centre on the 29th May. It might be an amount that most can’t fathom spending on a piece of jewellery, or even a home, but Christie’s are no stranger to rare diamonds and jewels with their auctions making headlines time and time again for record sales. 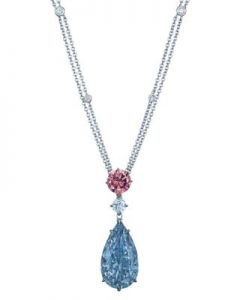 So, what is it that makes this necklace so valuable? Diamonds with opulent colours are relatively rare compared to colourless diamonds. It is their intensity of colour and clarity that gives them their value. For every 10,000 colourless diamonds found it’s possible only one fancy coloured diamond will be unsurfaced. The term ‘fancy coloured diamond’ is not to be confused with ‘fancy cut diamond’ which refers to any shape a diamond is cut that is not a round brilliant cut. Fancy vivid blue diamonds are considered to be the rarest of all coloured diamonds, particularly ones with this depth of colour. The immaculate pear shaped diamond necklace was designed by famous jeweller, Moussaieff – the grandson of a gemstone trader who had made previous record sales of diamond jewellery he designed. The piece is also adorned with a 1.60-carat, circular-cut, intense pink diamond and a 0.35-carat white diamond, which the feature stone hangs below.

Rapaport announced that in addition to this magnificent piece, the auction will feature; a jadeite bead and diamond necklace, a lavender jadeite bead necklace, an exclusive coloured diamond bracelet created by Edmond Chin for the House of Boghossian and an oval-shaped, 12.85-carat, fancy intense orangey-pink, VVS1 diamond ring, surrounded by a double layer of half-moon and triangular-shaped white diamonds, with a pre-sale estimate of $5.7 million to $8.3 million.