You might have heard that cushion cuts are becoming more and more popular for engagement rings – Sofia Vergara wears one, and everyone seems to be following suit. 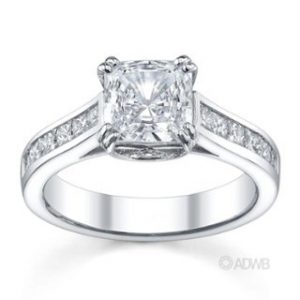 The problem is that “cushion cut” is not a single cut, but is more a “family” of cuts with possibly confusing names such as “classic cushion,” “broken glass” and “old minders” – terms which mean nothing to anyone except a jeweller. Fortunately, this can simplify down to two basic looks. “Chunky cushion”, which has a clearly defined pattern when looking down at the stone, resembling round cut and “crushed ice,” which merely shows an apparently disorganised sparkle similar to a radiant cut.

What makes it a cushion cut is that it is square or rectangular with rounded corners – like a cushion or pillow. Because of this they’re sometimes called “pillow cut.” Another name is “candlelight cut” – because the cut was originally designed to look good under candlelight (this does mean some older style cushion cuts look less sparkly under electric lighting).

Chunky cushion is sometimes called antique cushion, although the cut is not that old. It first became popular in the 19th century, then fell out of fashion until very recently. It is most commonly used in engagement rings, as it is seen as a “romantic” shape – but can sometimes be seen on earrings or pendants. The cut is considered to be sophisticated and subtle, rather than flashy.

So, when should you use a cushion cut? The things to bear in mind are the following:

Cost on cushion cut stones is comparable to round and oval shapes, although as always, size and clarity will be more important. It is also often possible to find antique cushion cut rings, due to the style’s popularity in the nineteenth century. Because there is so much variety in cushion cut, you should make sure to see the ring in person or, failing that, a high quality magnified picture. Otherwise you may find you are not getting what you want. The most important criteria – as with any diamond ring – is whether you like the look of the stone and setting.

In conclusion, a cushion cut engagement ring is a good choice if you want a ring that shows sophistication and refinement, but not the best for high levels of flash.