An historic emerald-cut diamond weighing 163-carats is set to sell for over $30 million USD when it goes on sale at Christie’s in Geneva next month.

The D-flawless diamond named The Art de Grisogono, Creation 1, was unveiled at the Dubai Diamond conference on Tuesday. It first appeared in a necklace setting, before transforming into the centre piece of a bracelet. 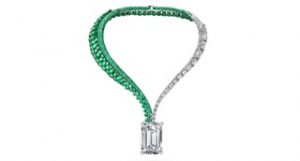 “We wanted to provide the lucky woman who possesses this work of art with an option of how to wear it,” Fawaz Gruosi, founder and creative director of de Grisogono.

The piece is said to be the largest emerald-cut, D-colour, flawless diamond to ever go on auction. The polished diamond came from a 404-carat rough stone discovered in Angola.

14 Craftsmen worked on the diamond from which, five smaller satellite stones were also polished. These will sell separately.

Grisogono’s decision to sell the stones independently is a strategy to present special diamonds as works of art. “It’s not only about the diamond” said Christie’s Middle East head of jewellery, David Warren, “It’s about an artistic jewel.”

The stone was unveiled in Hong Kong in September, and has since set out on a world tour. With stops including London and Dubai. It arrives in New York on the November 4, before finally stopping in Switzerland a week before its sale on November 14.

Inspired by this magnificent gem? Customise your own unique piece here.