What do you do with the engagement ring if you and your fiance split? It’s an age old question and also a very different issue for every couple.

Well, Mariah Carey has showed that she believes the lady gets to keep the ring. The Star was spotted wearing the engagement ring from Australian billionaire, James Packer, in New York this week. 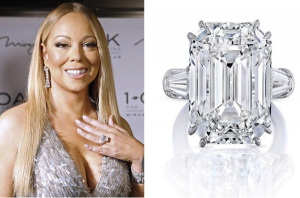 The star wears the 30 carat diamond valued at USD$10 million on her middle finger more than a year after their split in October 2016.

The pair split just 9 months after their engagement. Packer let Carey keep the multi-million dollar ring despite describing their relationship as a ‘mistake’. “Mariah is a woman of substance. But it was a mistake for her and a mistake for me” said Packer of their split.

The couple’s split included a USD$50 million settlement demanded by Carey. But a Fairfax article from Dec 1 notes that Packer settled with Carey for AU $13 million. If you convert that $13 million to US dollars that’s just about US $10 million. The exact price of the ring, suspicious, no?

So maybe Mariah Carey didn’t get all she wanted for Christmas, but she did get a 30 carat white diamond engagement ring.

Inspired by Mariah’s unique engagement ring? Customise your own here.