Almazy Anabara, a subsidiary of Russian mining company Alrosa, has discovered a rare pink diamond weighing 27.85 carats. The rough pink diamond has the potential to be the most expensive diamond in Alrosa history if the company decides to polish it themselves.

Alrosa released a statement on Thursday saying that the pink diamond is of gem-quality and nearly free of inclusions. It is also the largest pink diamond Alrosa has ever unearthed, with the dimensions: 22.47 mm x 15.69 mm x 10.9 mm. 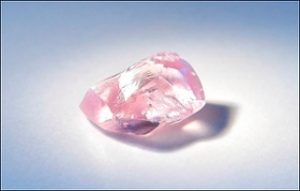 The largest rough pink diamond the company had ever unearthed previous to this was a mere 3.86 carats, discovered in 2012. Alrosa said their mining operations only uncover coloured diamonds weighing more than 10 carats once a year.

The United Selling Operations of Alrosa and the company’s polishing division are examining the rare pink diamond. The company needs to make the decision of whether to auction the stone, as a rough gem or cut it into a polished diamond.

For reference, Sotherby’s recently announced  a rare, fancy intense pink diamond will be up for auction for an estimated $20 million to $30 million USD.

Has this unique gem caught your eye? At Australian Diamond Brokers we specialise in custom made engagement rings. Design your own unique ring here.