Sotheby’s Auction House announced that a rare, fancy intense pink diamond will be up for auction for an estimated $20 million to $30 million USD.

The diamond has a weight of 37.30 carats and according to Sotheby’s, the Raj Pink diamond is the largest fancy intense pink diamond on record. Sotheby’s set the previous record for the sale of the Graff Pink in 2010, for $46.2 million USD.

Sotheby’s noted that the Graff Pink is a third smaller than the Raj Pink and it’s colour is not as intense. The Gemological Institute of America (GIA) noted it as an “astonishing stone” with a “very bright and ravishing fancy intense pink colour”. 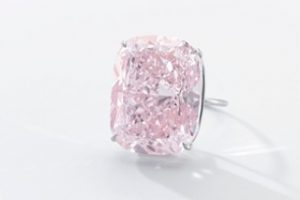 The rough diamond that produced the Raj Pink was discovered in 2015 and was studied for over a year. In 2016 it was brought it to life with a modified cushion cut.

The GIA said that “For a diamond to display strong, unmodified pink colour like that observed in the Raj Pink is rare.”

The record diamond will take centre stage at the Magnificent Jewels and Nobel Jewels sale in Geneva next month.

Inspired by this rare diamond? Customise your own unique ring here.