Your engagement ring is so special, in part, because it’s the only one you’re likely to receive… Unless you’re Victoria Beckham that is. Over the course of her 19 year marriage to husband David Beckham, she’s been spotted wearing a variety of rings on her engagement finger and is now on to her 14th dazzling ring.

The most recent addition to her collection is an elegant square cut yellow diamond, set on a platinum pavé diamond band, reportedly worth around $215,000. 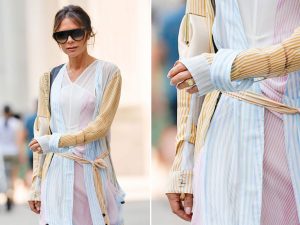 The design of her rings over the years has varied almost as much as her evolving style as she’s made her way from a pop princess to footballer’s wife through to established fashion designer. Here’s a look back at her 14 fabulous engagement rings. 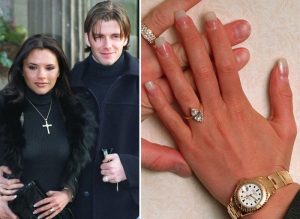 Back in 1998, David originally proposed with this (comparatively modest) 3 carat marquise cut diamond with a yellow gold band.

In 2001, Victoria swapped her engagement ring for a more subtle, diamond encrusted platinum band, in similar style to that of an eternity ring.

By 2003, Victoria upped her ring to this large emerald cut diamond with tapered side baguettes on a thick platinum band.

Gifted as a 30th birthday present, in 2004 Victoria was sporting a large pink champagne oval cut diamond ring in a halo setting, reportedly costing around $1.1 million.

In 2005, Victoria showed off this stunning 17 carat pear cut diamond ring set on a pavé band, which is possibly the biggest diamond in her collection.

By 2006, Victoria began to adopt her signature hair sweeping pose, perfectly showing off her new yellow, emerald-cut diamond ring which was complemented by a triple set band.

2007 was the year she transitioned into the world of gemstones, with this striking cushion cut emerald with a platinum spiral setting

Returning to a classic emerald cut diamond on a pave band in 2008, this huge 15 carat ring was reported worth half a million (US) dollars.

In 2009, Victoria showed off another stunning, vibrant gemstone, with a an oval-cut ruby on a diamond halo ring.

Continuing her love of large gemstones, in 2010 Victoria stepped out wearing an oval cut  sapphire with a pavé set platinum band.

That same year she began wearing a smaller, classic style pink diamond ring set on a yellow gold pavé band, which she wore for some time.

By 2015, it was time for a new ring. This time, she was debuted a round cut diamond set in a halo design, complimented by two side stones.

In 2016, Victoria received a simple square cut diamond ring set on a pavé diamond band. This is the most recent ring she’s worn before her newly debuted 14th ring earlier this month, and is in a similar, elegant style.

We’re excited to see what’s next in the Beckhams’ extravagant jewellery collection. In the meantime, if these exquisite rings have sparked your inspiration, create a beautiful custom ring  for your loved one with AWDB – as Victoria shows, there’s always an excuse for a new ring.