We all looked on in awe of Meghan Markle’s custom made three stone engagement ring from Prince Harry, naturally the next we’re now thinking about are the wedding bands that the couple will choose.

The royal family have a tradition of using Clogau gold from the Clogau St. David’s mine in Wales since the early 1900s. The gold has been used in the wedding rings of the Queen Mother, Queen Elizabeth, Prince Philip, Prince Charles, the late Princess Diana, Camilla Parker Bowles and Kate Middleton. 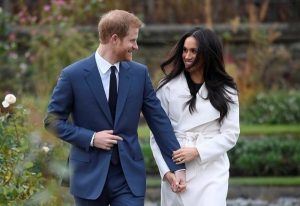 The gold has a pink tinge to it and almost all of the living members of the royal family have used the gold in their wedding bands. The first exception being Prince William and Kate Middleton, as only Kate wears a wedding band made of Clogau gold.

The Clogau St. David’s mine used to be the most productive mine in Wales, however the mine has since been declared ‘exhausted’, which means there is little gold left in the mine. This makes the Welsh gold incredibly rare and more expensive than gold from other mines.

Clogau Managing Director, Ben Roberts, says “The royals were looking for any gold that they could use from the country, so it [the choice] would’ve been natural selection”.

The royal family has a reserve of Clogau gold, but people aren’t sure how much is left. So if Harry and Meghan decide to go with Clogau gold, Roberts says they will probably be “A very deep 18ct look. So it’s usually very gold and very plain.”

Whatever gold the couple choose we look forward to seeing it, and the ceremony that follows.

Looking for the perfect pair of wedding bands? ADWB have a selection of elegant wedding rings for both the bride and groom.

If you’re looking to sell your gold jewellery in Melbourne, request a consultation below.